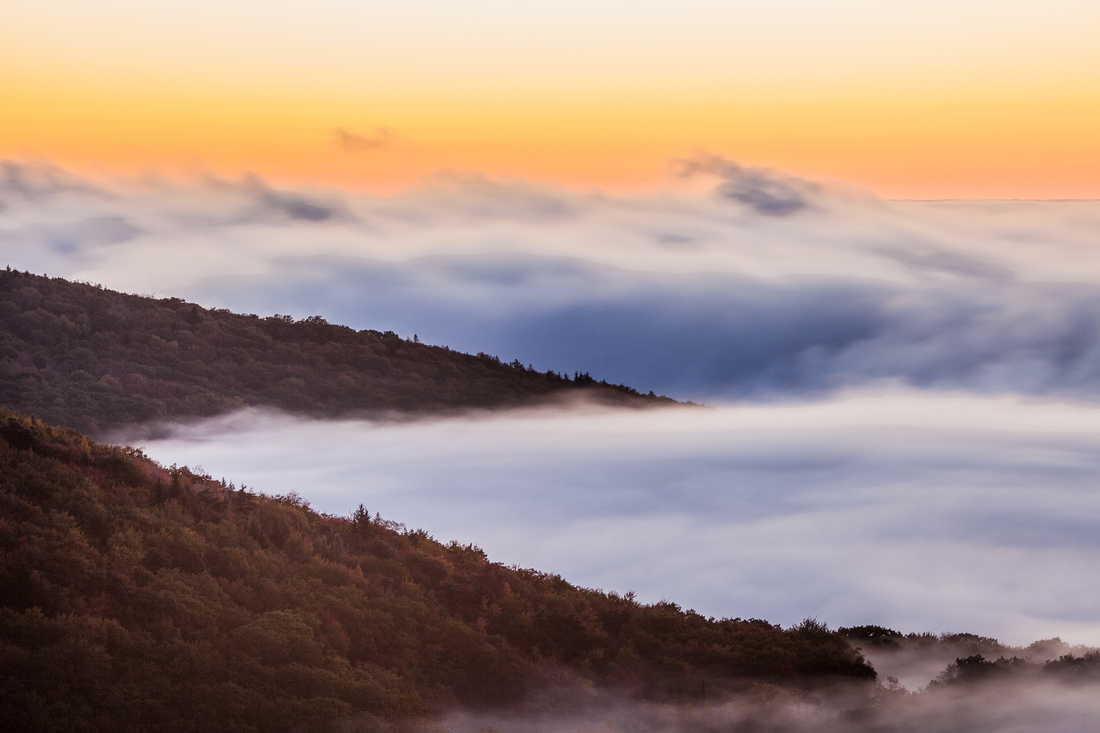 Well at the moment Hurricane Sandy… Sandy?  Really?  When I hear the name Sandy, I think of Olivia Newton-John in Grease, and not the demure Sandy of most of the movie, but rather the leather clad smoking Sandy that shows up at the end.  Not sure what that means, but I'm sure it's significant.  I mean significant beyond me showing my age and slightly geeky upbringing. Anyway, Sandy is bearing down on the East Coast and the National Weather Service pointed out that the pressure was extremely low for a category 1 storm.

Now having a brain that is constantly in free association mode, I immediately glommed on to the word pressure and it's implications.  For me, October in the Southeast is an example of HIGH pressure,  The Southern Appalachians in Autumn correspond to the World Series perfectly, where you had better bring your A game.  It's the culmination of the long seasons of spring through summer and leads into the winter lull when everything goes gray and dead and landscape photography become much more difficult. The endless green tunnels and vistas that were so welcome after the winter have become old hat, and the idea of shooting midday and actually getting something visually interesting has a special appeal. It's when every landscape photographer hopes to get that iconic shot of autumn color, and I do mean EVERY photographer.

My first attempt this month was a trip up to the Blue Ridge Parkway between Boone and Blowing Rock on October 8 and 9.  It was early, both in the day and in the leaf season as well, when I made the exit off of 321 N onto the Parkway.  The first predawn light was starting to show, and within three or four minutes it silhouetted a photographer standing by a tripod in a field.  "Uh Oh."  Over the next five miles between 321 and the Linn Cove viaduct I saw enough tripods to equip a remake of "The War of the Worlds."   The photo season had begun.  In addition to the photographers, there were hikers, cyclists, and leaf peepers all prepping for their day in the morning glow.  By the time I made it to the Linn Cove Viaduct there were already 10 cars there.  I felt like there should have been a Sergio Leone western whistle soundtrack when I got out of my car.  Another gunslinger come to town…

OK you can wake up now.

Suffice it to say with my respectable but  less than new and shiny camera gear,  I felt like I had brought a knife to a thermonuclear war…  I know, I know. "It's not the camera it's the photographer" (actually it's both), but there will always be a certain intimidation factor when someone shows up with a rig that costs twice as much as my car.  The gentleman was nice enough and we rapidly started discussing the light, the foliage and the cloud cover that stretched out in front of us.  I started looking carefully and mentioned how I wished that the color were a bit higher and that it looked like it might be a rather subdued fall.  "Yeah, that's true.  But it still beats being behind a desk early on a Tuesday morning."   Point well taken.  We stood for a few minutes above the clouds, the soft scraping as tripods were shifted onto position, the beeps and clicks of Autofocus motors kicking in and of shutters being released. The sun came up over the clouds and illuminated the small islands of trees that poked through the gently moving surface.  It wasn't to be the showy flash of color and light that I had hoped for; it was something entirely different - a subtle show of sweeping lines and pastels. 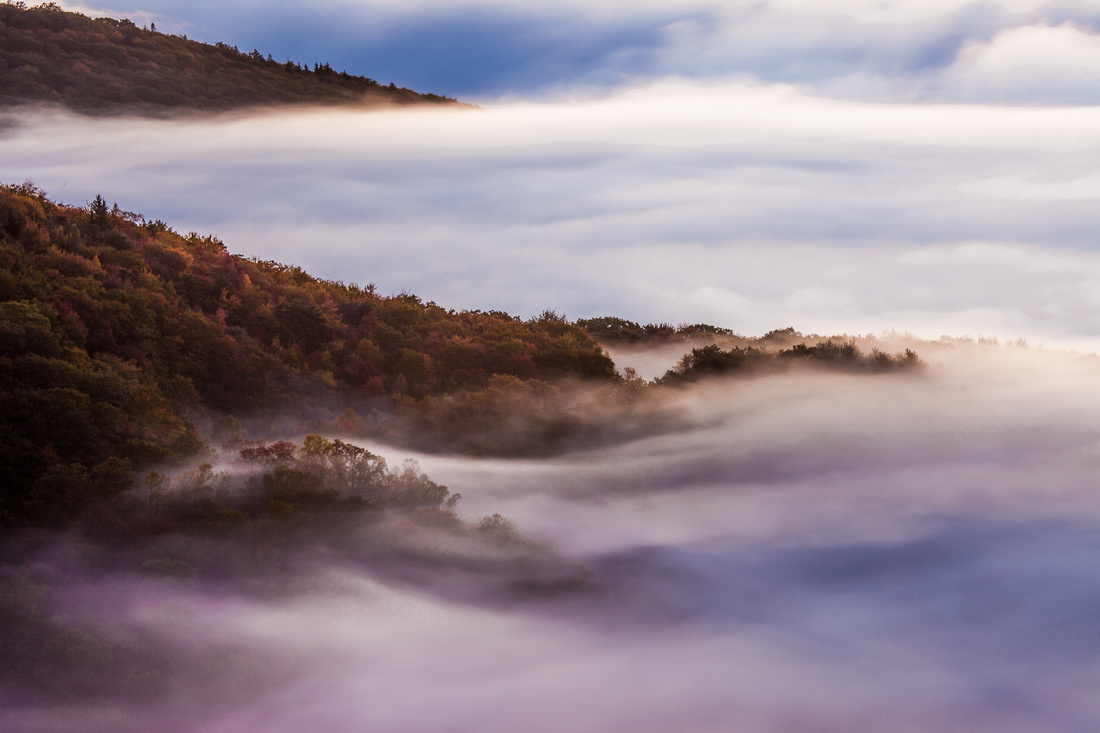 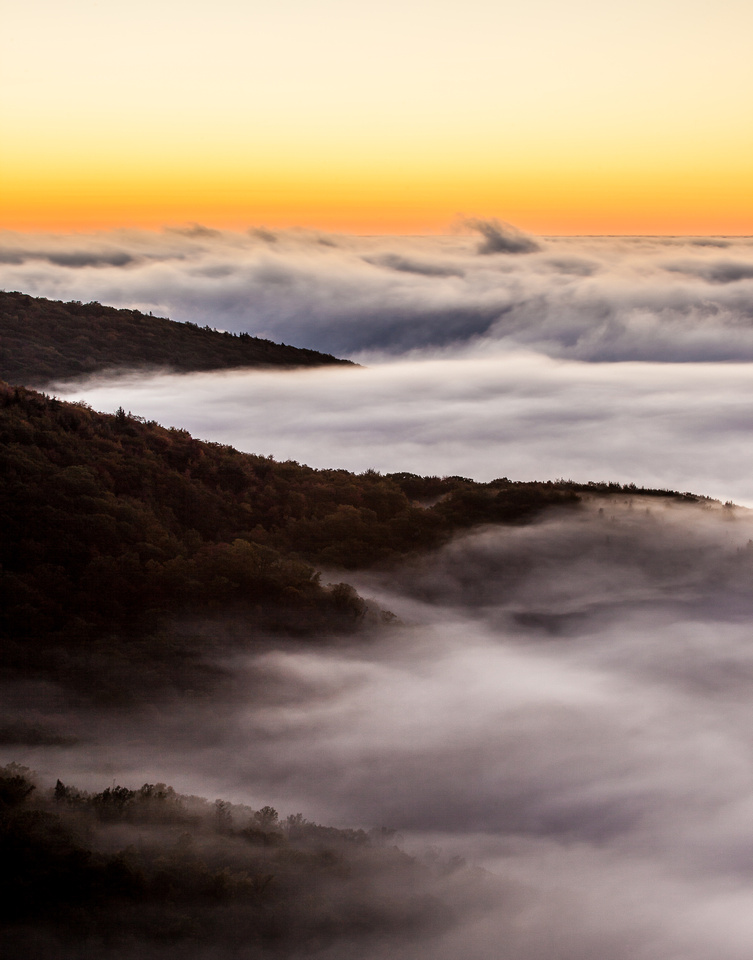 Slowly the clouds crept up the ridge like they had in Grayson Highlands.  Soon, we were engulfed in fog.  I decided to move up the ridge to see if I could get above the clouds again, but to no avail.

As I waited for the fog to clear, I watched as the mist condensed on the leaves adding a surreal jeweled scape perfect for a few close ups.

After the sky failed to clear, I went back down and scouted out a spot that I though might be good the following weekend.  Boone Fork.  To be continued.