Of Mountains, Moleskins, Ego, and the Eagle Cap.

The first notion that I might be "The One" on my trip to Oregon's Eagle Cap Wilderness came a couple of weeks before departure time.  My wonderful wife came home from her professorial duties with a bad cold, which a week later,  in true, go-west pioneer fashion, decided to hop the virus wagon train into new territories, me. Another indicator that I might be, "The One"  was when, despite my best efforts, a half dozen overnights and day hikes, I couldn't get my new backpacking boots to break in properly forcing me to revert back to my older boots….which had given me blisters as well, but had at least broken in.  The final indicator that I might be, "The One" was one of my own making. While my trail companions  prepared for this trip via P90X and half marathon training, I had merely, and reluctantly, decreased my beer intake and increased my total running mileage by a paltry five miles a week… on the treadmill.

Despite all the quotes and ominous capitalization there is absolutely nothing special about being, "The One."  Every group has it; the caboose, the, sweep, the tail, the person bringing up the rear.  Someone's got to do it.  I just don't particularly care for it when it's me.  I might have an ego issue or two.

A little on the Eagle Cap Wilderness.  Located in the far northeast corner of Oregon, The Wallowa Mountains and the Eagle Cap Wilderness within, seem to have more in common with the California Sierras than the southern Cascade Mountains than most easterners associate with Oregon.  The climate is decidedly high desert/alpine, with most of the precipitation occurring as snow during the winter months.  Approaching from any direction except the east they seem to rise dramatically from the farmland and scrub desert that defines the inland Pacific Northwest. From the east the rise is more abrupt, the boundary with neighboring Idaho being the Snake River and the deepest canyon in the US, Hell's Canyon.  A drive from Riggins, Idaho, fifty miles distant, would take about five hours to navigate around the almost inaccessible gorge.

None of the mountains in the Eagle Cap Wilderness top 10,000'.  The highest being Sacajawea at 9838'.  This tends to keep the trophy peak bagger hikers and climbers from taking the Eagle Cap TOO seriously, which means that, despite it's reputation as the most popular backpacking destination in eastern Oregon, the crowds tend to be a bit smaller than in the Cascades.  The centerpiece of the Eagle Cap Wilderness is the eponymous Eagle Cap. From it's slopes the Minam River, Lostine River, Wallowa River, Imnaha River, Eagle Creek, and Hurricane Creek watersheds radiate like spokes on a wheel.  Our planned weeklong trip would have us cutting a wedge from the far north/ northwest section of this circle.  We would climb southward upstream along the West Fork of the Wallowa River, with an eleven mile out and back side trip to Ice Lake and it's surrounding peaks, then up to Mirror Lake on the slopes of Eagle cap and then descend and exit along the East Fork of the Lostine River.  Approximately 40 total miles.

After arriving in Spokane, WA from Charlotte, NC with Gary and Katie, my friends and regular hiking partners in crime, we drove four and a half hours to Enterprise Oregon, got our room, had an excellent dinner and brews at Terminal Gravity brewing Company and prepared for the shuttle the next day.  Our shuttle was provided by Mac Huff from Eagle Cap Fishing Guides.  He provided a wealth of local information regarding flora and fauna and seemed to soak up any information he could about our Southern Appalachian landscape.  His enthusiasm was contagious and the 35 mile drive from our exit point on the Lostine River to the Wallowa Lake trailhead only increased our enthusiasm.

Looking up the West Fork Wallowa

Or at least for about half an hour. "Uh, I'm feeling a little rough."  I started.  Gary had set the pace and I was, frankly, not ready for it.  Two years prior we had done the Long Range Traverse in Gros Morne NP Newfoundland.  At that time I was in slightly better shape than he was but at 6' 3" to my 5' 7.5" (Yes I'm counting the half inch dang it!) we were able to keep approximately the same pace.  This time I felt like a chihuahua trying to keep pace with a greyhound. My little legs spinning and my tongue lolling out.  Gary was obviously in his element and he was breathing evenly.  Katie, as usual seemed to be unaffected by whatever went on around her. She was simple economy of movement and she listened to her body.  I on the other hand refused to accept what my body was telling me.  At the two mile point I started to feel a hotspot.  I immediately asked for a break so I could tape my heels. 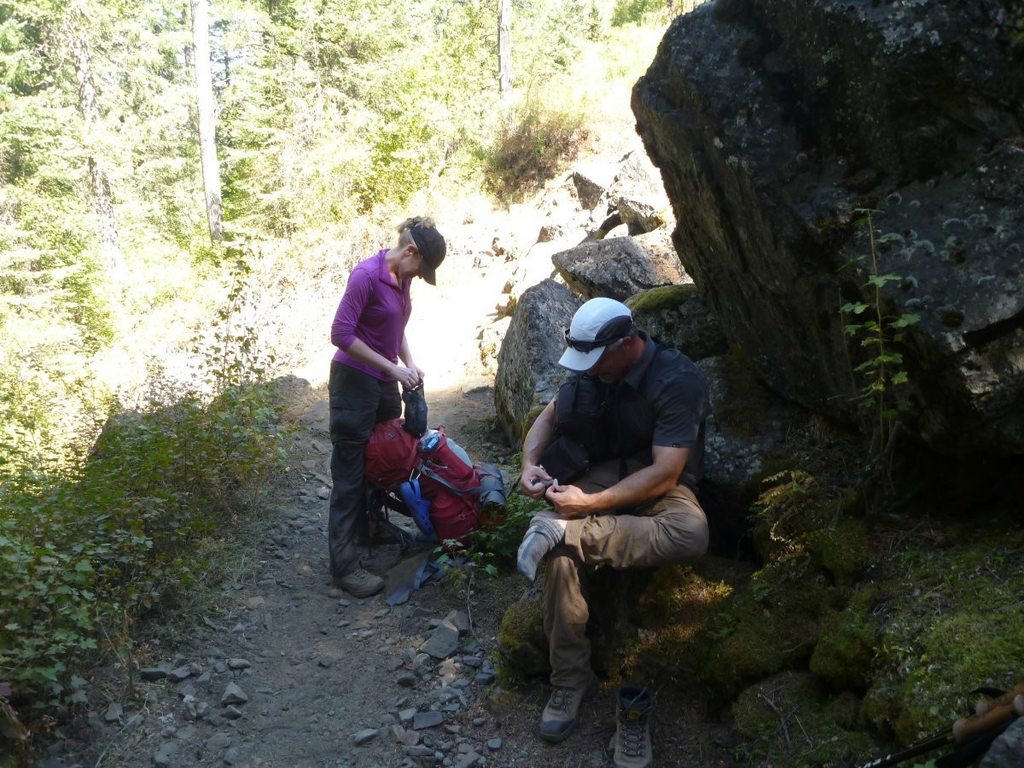 Blister care 101(Picture by Gary Sizer)  Nurse Katie on the left, author on the right

Half a mile further on, the trail to Ice Lake split off from the West Fork Wallowa trail with a log crossing the West Fork of the Wallowa River.  Here at least I was in my element.  I always loved walking tree limbs and guard rails when I was a kid.  I never got over it.  On the far side of the crossing we took a short break, I checked my heels.  "Oh, Man…"  Whether due to the lack of conditioning, the virus or who knows what, I had sweat the tape right off of my heels.   Even after cleaning with an alcohol wipe nothing would stick to my heels for long.  2.5 miles in and blisters were a foregone conclusion.  We refilled our water bottles at the crossing because although the trail paralleled Adams Creek, it was often far below us in a gorge.

Another mile on, my legs started to feel rubbery, I had told Gary and Katie to go on ahead at the log crossing and I would just catch up.  "KATIE, HOLD UP!"  I yelled ahead.  "I'M CRAMPING!"  I sat down in the warm sun at the end of a switchback in the trail.  It was a field of grass and wildflowers surrounded by the peaks along the River.  Within ten seconds my right calf cramped so badly that my toes straightened right out, my lower leg forming an exclamation point of my folly.  I had been taking water at regular intervals but apparently my electrolyte levels hadn't been getting replenished nearly enough.  As opposed to the humid Southeast sweat doesn't stick around very long in the arid west, so using sweat as an indication of dehydration and salt loss is a no no.  Katie and Gary both came down to my aid.  I could see them swapping concerned glances and going into contingency mode.

This is the truly odd part, part of me was miserable and the rest of me ridiculously happy.  I was in one of my favorite places on earth.  Part of my soul lifts every time I get in a natural place. Clark's Nutcrackers, Magpies, Western Chipmunks etc. were like rarely visited dear friends.  I had no intention of quitting this trip. Pain was pain, but unless infection set in or I allowed myself to get so dehydrated heat stroke came on, it was going to be a matter of pain management.  The hard part would be convincing my trail mates that I was going to be OK. 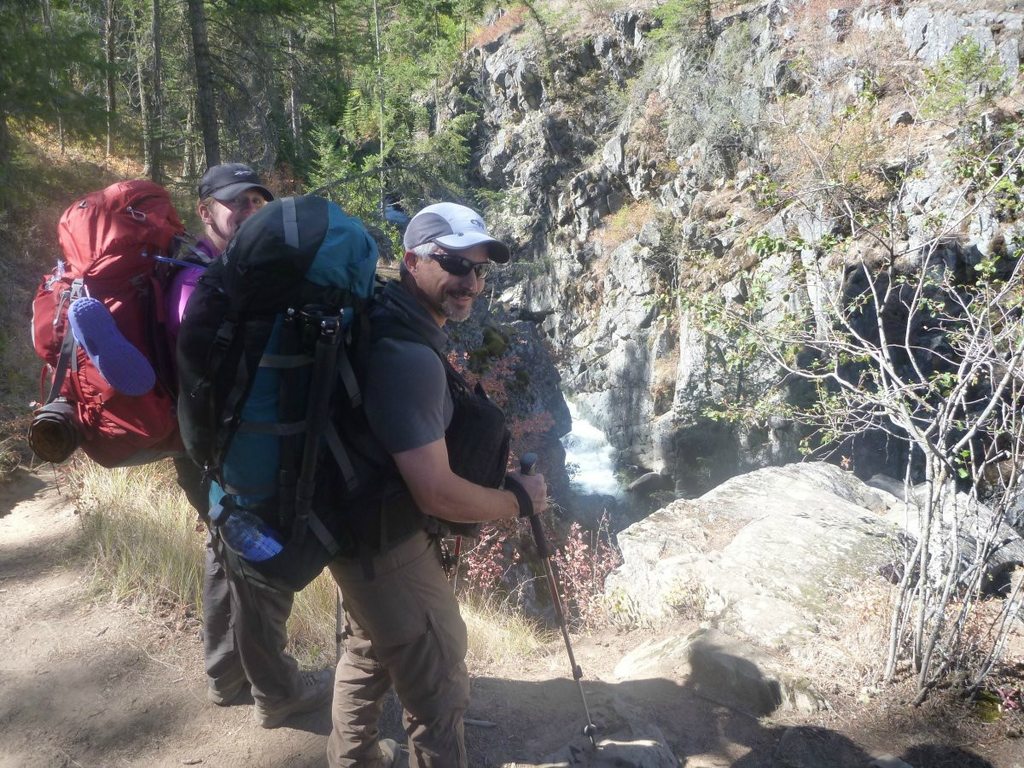 I took a powdered electrolyte supplement that I had brought and it definitely helped.  Katie insisted on taking sweep position and spent the next four and a half miles  with me, despite my protestations that she move at her own pace.  I joked at my own discomfort to both reassure Katie and to take my mind off of it.  We arrived at Ice Lake about an hour before sunset.  Approximately 8 miles and 3300 feet of vertical in five and a half hours.  It was as stunning as it had been my last visit in 2007.  Peaks form a nearly unbroken ring around the lake with the geology running the gamut from granite to limestone to basalt, the water a deep indigo.  A place that felt like home. Our original plan was to climb the Matterhorn, one of the surrounding peaks, traverse across a ridge and attempt a class III-IV scramble across another ridge to Sacajawea Peak.  I made the suggestion we take a rest day so I could recover.  I hated doing it because this whole silly adventure had been my idea.  Pictures had been put on refrigerators, days spent in anticipation.  Katie and Gary readily agreed, adding that we could always just turn around at any time…  After watching the sun set over the Matterhorn we stayed up and watched the most spectacular stellar display we had ever seen.  The Wallowa Mountains exist in one of the darkest spots in the US, with almost no light pollution.

I arose before dawn the following morning,

feeling much better, I wandered the lake and took pictures of the small wildlife that live around it,

waterfalls that fed into and out of it,

and the peaks that surround it.

Gary and Katie joined me for a couple mile walk around the lake up beyond a waterfall where a mountain meadow with a meandering creek running through it looked like it was taken straight out of an early fifties disney film.  It was a day of vacation, which after all, was the point.