Of Mountains, Moleskins, Ego, and the Eagle Cap. Part 2

Confusion, thy name is being jarred awake at 3:45 AM by a mountain lake to the repeated sound of a quacking duck. OK, that's too long to really be a name but iPod alarms are odd things.  I think I liked it better when I woke up to the sound of a beeping Casio LCD watch twenty years ago.  Sure it was annoying, but much less surreal, and life is surreal enough waking up in a tent.  A quick self inventory indicated that yes, my blisters looked like some thing that…well they looked like something, but despite the dirt were not showing signs of infection.  This would become ritual for the rest of the trip, wake up, look at feet, knock wood, lucky seven or snake eyes?  The trail was dusty and I couldn't keep bandage, moleskin, tape, nor second skin to stay in place so… I'm sure the sounds I made while wiping blisters down with an alcohol pad every morning and evening were quite amusing. A grown man whimpering seems to elicit that reaction.

I tried calling out to Gary and Katie that it was time to get up for our climb of Matterhorn and the traverse across to Sacajawea.  I called again.  Dammit, I was going to have to get out of my tent.  Discontent, thy name is leaving a warm sleeping bag.  I  stumbled over to Katie and Gary's tent and called until I received something that sounded like a confirming growl from Katie, otherwise one of the wolverines who had recently come back to the Eagle Cap had bedded down with K and G, I'm not sure which.  Either way there was no point in hanging around.  From there things were surprisingly smooth.  We prepped our summit packs and headed off at 4:30AM  by headlamp around the lake to start the climb.

Looking down on Ice Lake

The climb to the summit of Matterhorn from the lake is a little over a mile and half and climbs 2000 feet. The rest of the ridge hike to Sacajawea would be about another mile and a quarter, crossing an unnamed intermediate peak 9775 feet high.  I'd love to take a geologist on this climb.  It's the rock equivalent of a three year old's playroom,  seemingly unrelated rock types scattered all over the place.  Someone tried to explain it to me, but after the description of the fourth geological" event" that helped shape the landscape, it became a buzzing in my ears.  Feeling good and with the immediate pain of my feet dulled by Ibuprofen, I took point position, trusting that if Gary wanted to bolt ahead he would let me know. Sans 40lb. pack and carrying about 8 lbs of camera gear I moved pretty comfortably. It's an amazing transition to the granite slabs and scree fields of the slopes of the mountain.  More and more vestiges of the previous winter's snow pack revealed themselves in small areas hidden from the midday sun.  The sun was rising to our backs over the Adams Creek valley and down into the Wallowa watershed,the first warm light of the sun had us shedding layers pretty quickly.

Gary and Katie during a rest break.


The dawn colors reflected in Ice lake, which was rapidly becoming a pond in respect to the vista surrounding it, soon to be a puddle.

The summit came a little bit before 7AM. 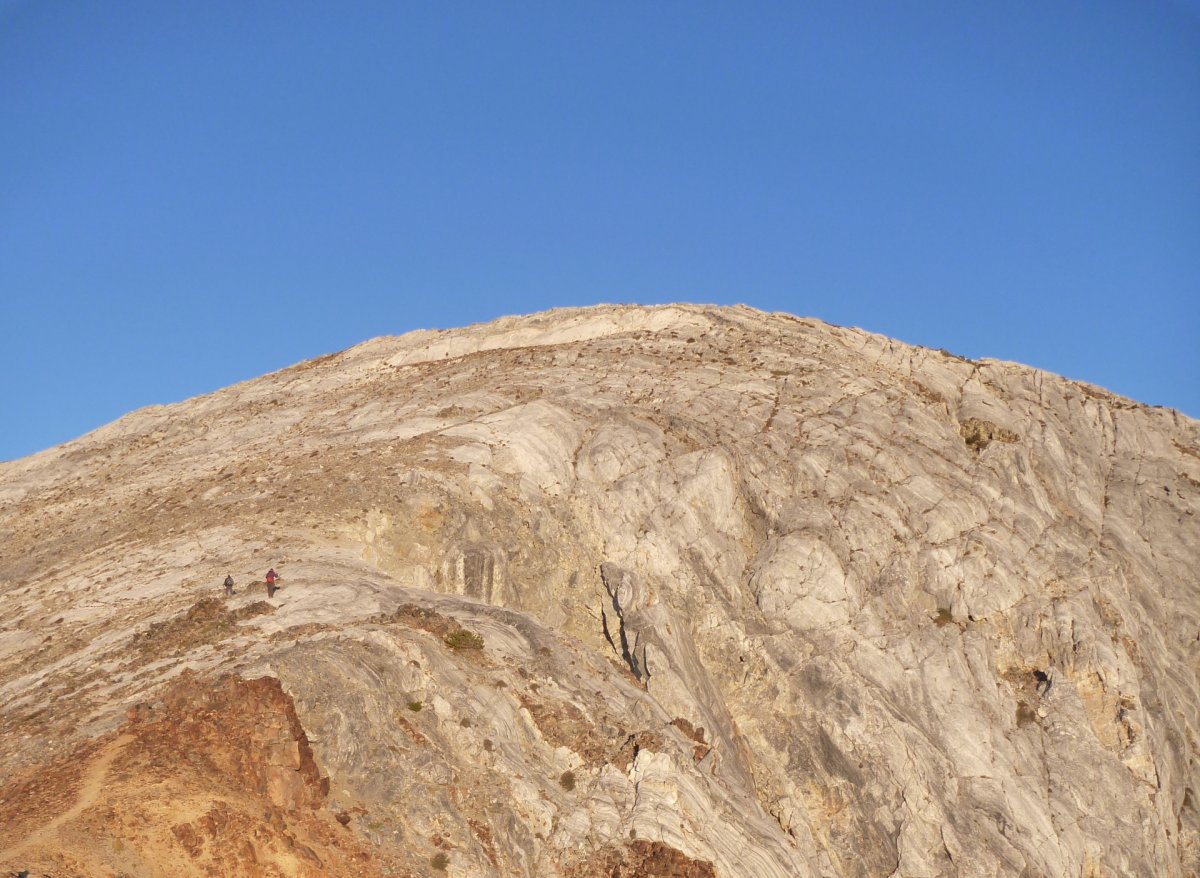 Author and Katie on the summit face. 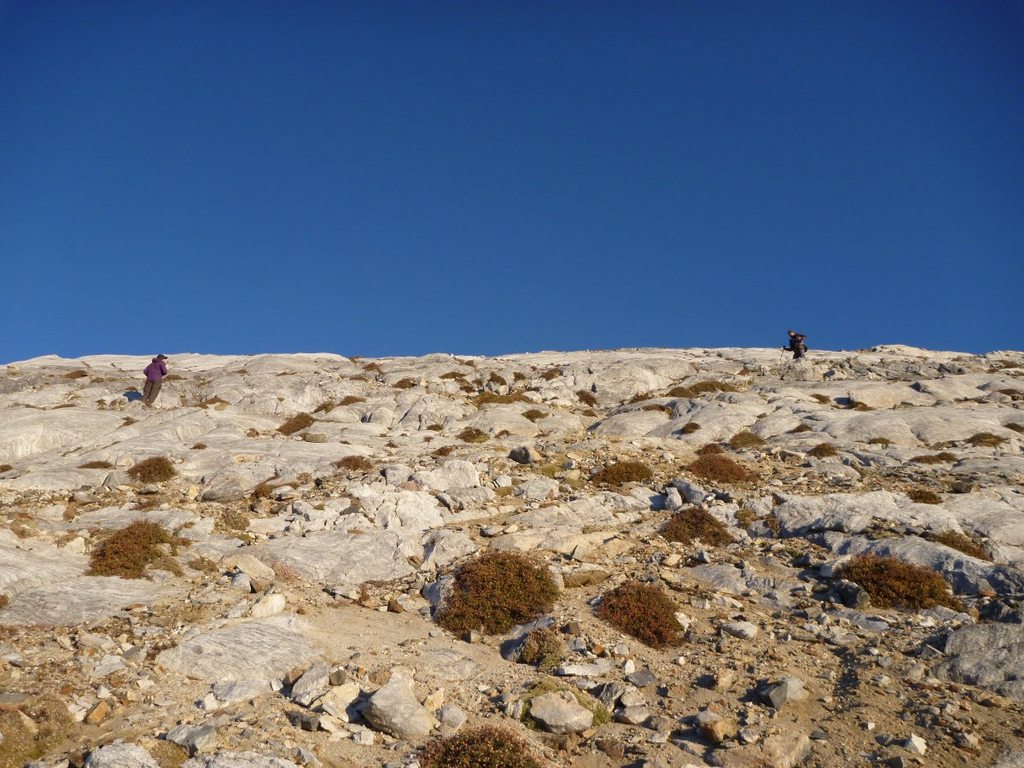 A stiff breeze was blowing up from Hurricane Creek Basin which dropped 3300 feet in about a quarter mile from the summit, so yeah, it was a cliff.  We enjoyed a late breakfast of sharp cheddar cheese and snack sausages, barely discernible from the pet snacks called "Snausages", so it become cheese and snausages for the rest of the trip.

Big grins all around.

View into Lakes Basin and Eagle Cap, our next destination.

After summit pics and eating we started down the ridgeline.  While not strenuous, the exposure can be a bit disconcerting, so we moved carefully.  The area just before the saddle that linked 9775 and Matterhorn consisted of some fairly steep down-climbing over slabs of granite, luckily the traction was amazing.  As we started the ascent of 9775 we came across a cave on the western slope.

Cave on the saddle between Matterhorn and 9775

Yup, a cave. On top of the mountain.  Geology is pretty cool, huh?  A little while later I announced that I didn't think I was going to make the attempt across to Sacajawea.  I wasn't at my best and even though I had the most alpine/ mountaineering experience of the group, I felt like I'd be a liability rather than an asset.  If the climb did venture into the class 4 realm I didn't want G and K concentrating on me instead of the rock.  This is excerpted from the Mountain Madness Website found here.

Class 2: Simple scrambling, with the possible occasional use of the hands

Class 4: Simple climbing, often with exposure. A rope is often used. A fall on Class 4 rock could be fatal. Typically, natural protection can be easily found

Class 5: Where rock climbing begins in earnest. Climbing involves the use of a rope, belaying, and protection (natural or artificial) to protect the leader from a long fall. Fifth class is further defined by a decimal and letter system – in increasing and difficulty. The ratings from 5.10-5.15 are subdivided in a, b, c and d levels to more precisely define the difficulty (for example: 5.10a or 5.11d)"

Katie readily agreed.  The traverse across to 9775 had been about the limit of her comfort zone which was class 3.

View back to Matterhorn Summit.  Hurricane Creek valley to the right.

Gary still wanted to make the attempt, so Katie and I waited as he started down the ridge.

About a quarter mile on he was stalled by the first gendarme, a spire of rock blocking the ridge, and having neither the time, nor possibly the inclination, to continue, he returned.

"Well, I found my limit!" he said cheerfully. I still want to go back and try it, but it looks as if it would be an all day affair and we were already a day behind. Instead of returning the way we came, I suggested we take a side ridge off of 9775 called the Hurwal Divide and descend down a scree slope back to the lake, via technique called "scree surfing" or "screeing" which is basically riding tiny little avalanches down a slope.  It sounds dangerous, but it's really quite safe and is often the quickest way to the bottom!  Katie was dubious, having never done it before but soon was descending with a grin and yell!

Katie and Gary Scree surfing down the Hurwal Divide.

As we neared the base of the Scree slope I look up and to the left and saw  two goats, a young one and it's mother, making quick work of some steep rock. From here it was a quick descent down next to the creek that feeds Ice Lake and then back to the campsite.

The goats making it look easy

It was about  11AM at this time. Our original plan was to camp after the descent, but my rest day had put us a day behind, so instead we were going to descend  the 5.5 miles back to the junction of the Ice Lake Trail and West Fork Wallowa Trail putting us only 3 miles behind our original schedule, but first… a nap. 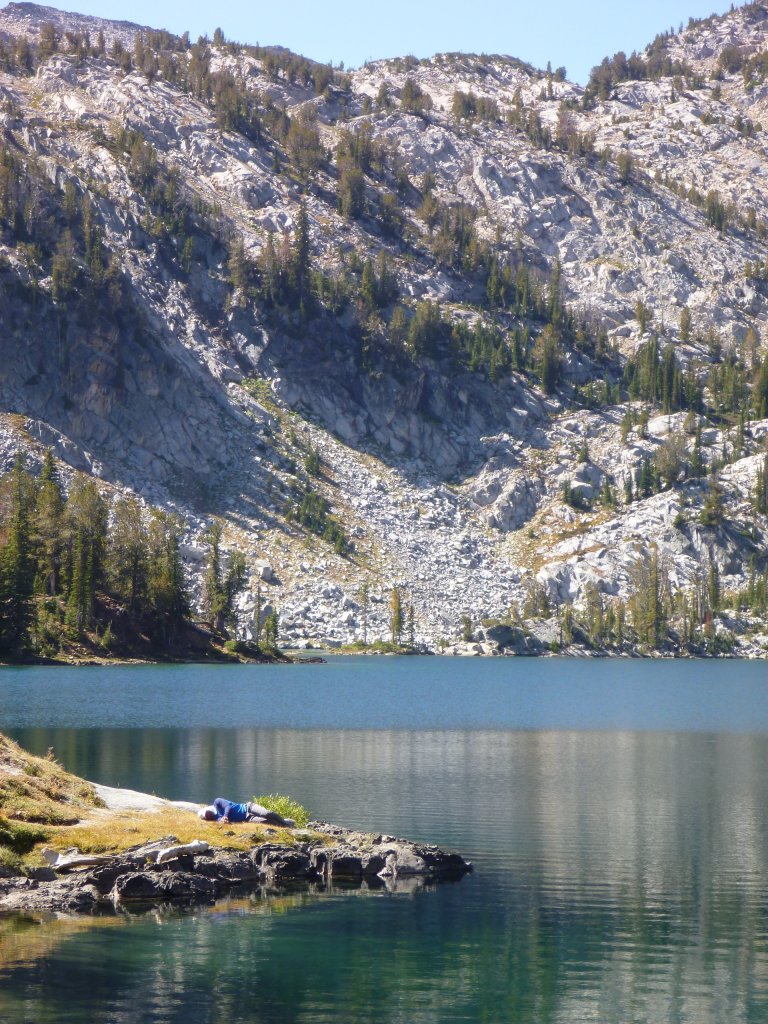 The final descent back to the WF Wallowa went by in a blur and at we were soon again at the first log crossing.  Katie, let me carry her pack across for her  to show my appreciation for her kindness on the way up!  We made camp at the site of the old bridge washout and anticipated the hike into the Lakes Basin

Katie at camp by the bridge washout.  The log jam behind her is where we had to cross.

Up next. Part 3  Into the Lakes Basin.