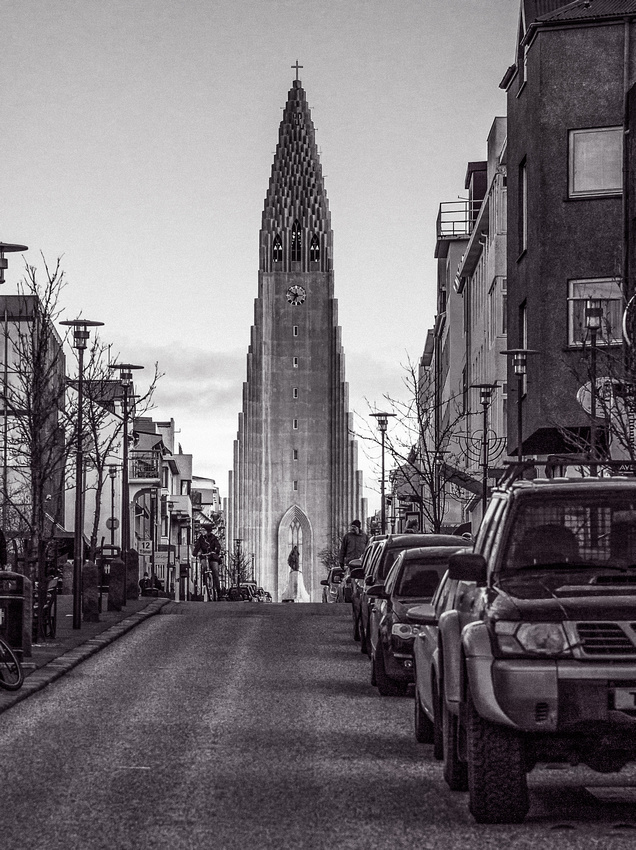 “I can’t believe we’re in Frankfurt.”

This wasn’t stated in the, “Oh my God, after all this time we’re finally in Frankfurt!” sort of way.  It was more of a “How the hell did we end up in Frankfurt?” confused disbelief.  “How long until our flight to Reykjavik?” I asked.   “We’ve got about an hour and a half until  boarding,” my traveling partner in crime answered. This wasn’t right. But it was real.   Ten, maybe twelve hours prior, all had seemed right with the world.  After months of anticipation and planning, I was being dropped off at Douglas International Airport in Charlotte, NC.  “Have a good safe trip hon!” my wife said as she dropped me off at departures.  “I’ll try,” I responded in typical cautious optimism mode.  Iceland.  I was going to Iceland, a place that had been on the bucket list for a quarter century.  My traveling partner in crime, Gary, had agreed to go with me to Iceland in March.  Not exactly high tourist season a few degrees south of the arctic circle.

We, along with Gary’s wife Katie, had notched backpacking trips to the Eagle Cap Wilderness of eastern Oregon and a trip to Gros Morne National Park in Newfoundland, Canada which consisted of a trailless trek that started with a climb out of a fjord and proceeded across the highlands of western Newfoundland with only the moose and caribou to accompany us.  Our relationship was trail-tested. Lost maps,  storms, gale force winds, rank body odor, and even more rank jokes were the fire in which our friendship had been forged.  Then we met US AIr.

Upon getting dropped off at the airport, I immediately checked the departure boards. “Aww.. you gotta be kidding.”  Our 5:50 PM departure had been delayed until 6:45. We had originally had a one hour forty five minute layover in Boston before jumping an Iceland Air flight into Reykjavik.  So it would be cutting it REALLY close. “OK, I thought, we can do this…”  As the board refreshed the blood drained from my face.

I tried to call Gary on the cell, but got nothing.  He had the tickets and confirmation data so I slumped onto one of the remarkably comfortable looking, yet remarkably uncomfortable chairs that seem to dot airports countrywide.  FIve minutes later Gary came in, right on time.  I apparently have the worst poker face in history because one look at my hangdog mug sent Gary into crisis aversion mode.  His recent international travel experience far outstripped my own, so he took lead.

We went up to the counter and were basically told to scan our passports and receive our boarding passes before anything else. Gary started enquiring about possible alternative flights but was rapidly shut down by the lady behind the desk. “Honey, I don’t wan’t to tell you anything because I can’t know for sure.  The info I get is kind of unreliable.  Your plane looks like it’s leaving at 7:00.”  We countered with the opinion of the computer screen over her left shoulder which had a different view of the ability of the airline to get their crap together.  “That says 7:30,” I said.  “Yeah,” she said, “but that’s not what MY screen says.”  Recognizing the futility of asking for a rational reason why there would be two different times estimated for the same flight within the airport itself, we moved on.  “Who can give us a better idea?”  “Well, check you bags and go to the gate.  They’ll give you a better idea.”  It looked like our bags were going on a trip whether we were or not.

We cleared security and went to the gate, where we found… no one.  Of course there wasn’t anyone there.  Why would there be?  The plane wasn’t going to leave until “7 something” and here it was “4 something.”  Efficiency would demand that airline employees not wait at a gate for three hours regardless of how many customers would go there expecting their plane to be on time.  We went on a search for the US Air customer service desk.  It wasn’t that hard to spot: it was the desk with the line of about 80 disgruntled people in a loose queue in front of it.  We dutifully got in line while we reached for our phones to call our wives to vent and let them know we might need a ride home, and then to call US Air customer service.  Gary connected and sat though the entire US Air sales spiel while waiting on hold.  Gary mused aloud,  “You know, waiting on hold for customer service might not be the best time to try and sell me on the virtues of your wonderful airlines.  Chances are I’m dealing with the stark realities of your product versus the pretty pictures you’re selling.”  Finally he got the “Very Nice Lady” from customer service on the other end.  She was kind, polite. and assured Gary that she would do her best to find a solution.  She did.

“Well there are no other flights to Iceland from the States today.  It’s the off season.”  This wasn’t an option because we couldn’t afford to lose a full day in Iceland.  We had our motel booked and paid for, and we were scheduled for a northern lights hunt the night of our arrival.  “I DO have an option of getting you into Reykjavik the same day, but it’s through Frankfurt, Germany.”  We let that sink in.  Fly 4300 miles in 9.5 hours to Frankfurt, wait 3 hours, and then board a plane to fly 1500 miles and 3.5 hours BACK THE WAY WE CAME.  Gary looked at me with raised eyebrows.  I gave a helpless shrug and agreed.  We were assured that our bags would be pulled off the Boston flight and put on the Frankfurt flight.

We arrived at our gate after sorting out the flight swap and boarded the plane.  “Where are we going again?”  “Frankfurt.”  “Right.  Frankfurt.” “It’s a nice airport!” said a man who had overheard our collective grumbling. “Well, that’s nice to hear,” I replied.  The flight to Frankfurt was long but uneventful.  The lady sitting next to me was returning to Germany to visit her family after living in Atlanta for 15 years.  When we explained why we were going to Germany, she replied in a vague german accent, “Really?  Wow.  It sounds like you’re being punished!”  There’s nothing like having your persecution complex confirmed by random strangers.

The man who said Frankfurt was a nice airport?  Yeah, he lied.  Well, that’s not totally fair.  It was clean, quiet, and aside from one packed restaurant and a small cart serving pastries, completely sterile once you cleared security.  The cliche of German practicality, efficiency and humorlessness was pretty much confirmed.  However the chairs, while equally as comfortable looking as those in the States, proved to be surprisingly… comfortable. 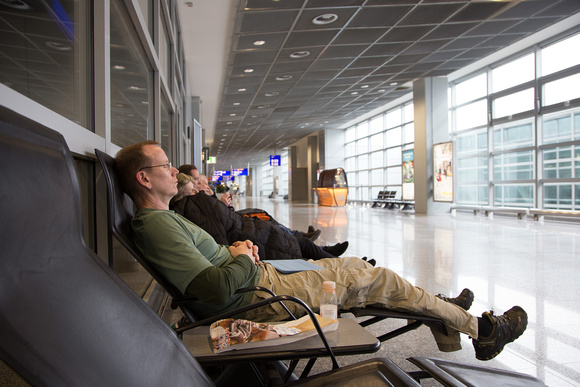 Frankfurt Airport Comfy German Chairs. Because no one expects the German Inquisition. 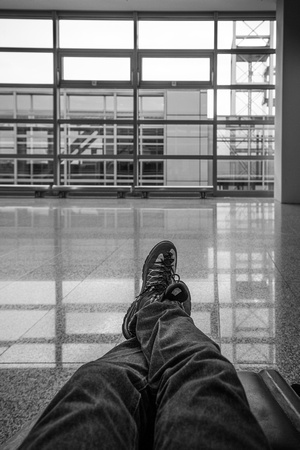 Frankfurt Airport Comfy German Chairs. Because no one expects the German Inquisition.

Comfy German Chairs.  Because no one expects the German Inquisition.

The flight to Reykjavik on Iceland Air was smooth and was our first introduction to the Icelandic language.  Across the seatback pillows and any other airline-branded paraphernalia are phrases translated from the English to Icelandic.  “Those are some LOOOOOONG words,” I said, “and I don’t even know what that letter is.”  Thankfully, every Icelander we met spoke near perfect English.  Once again, Americans luck out.  It just so happens the language we speak is as close to a lingua franca as exists in the Western world.

“Well, I think our bags are probably watching a Celtics game and listening to the Drop Kick Murphys.”  We watched the floral embroidered bag go around the carousel for the third time.  It turned out that it wasn’t just the stranger who had given us his opinion of the Frankfurt airport who had lied, the “Very Nice Lady” from customer service had also been less than truthful.  Our bags had made what was I’m sure was an extremely interesting and exciting journey, however they had failed to arrive at our agreed upon meeting point.  We signed the forms that would allow the airline to inform us when our prodigal bags decided to repent and come home and hopped the shuttle for our hotel. 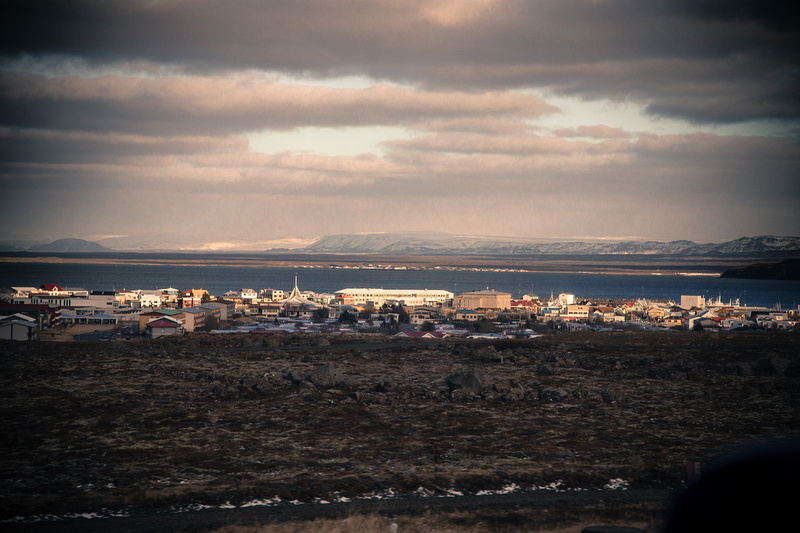 KeflavikLooking out the window at Keflavik, heading toward Reykjavik 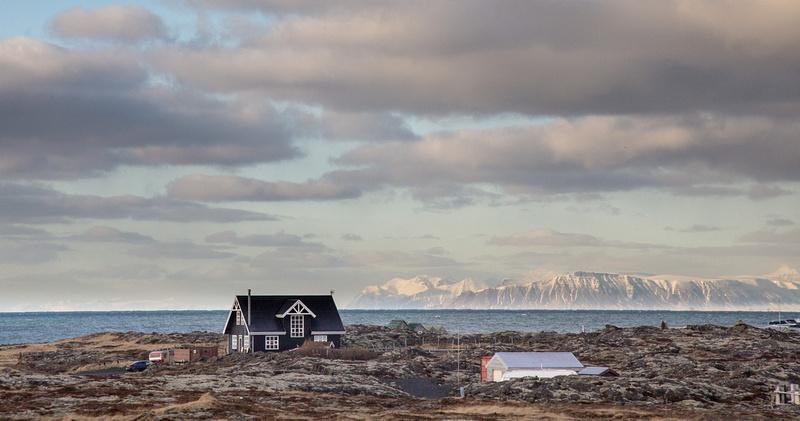 KeflavikLooking out the window at Keflavik, heading toward Reykjavik

Looking out the window at Keflavik, heading toward Reykjavik

We arrived at the hotel with our carry on bags and about fifteen minutes to spare before every shop in Reykjavik closed, leaving me without gloves and a hat and Gary without warm pants and long johns.  All of which were in our globetrotting luggage.  A rushed shopping trip into Reykjavik’s shopping district netted us some remarkably expensive long johns and accessories.  An excellent, though extremely rushed, meal in the hotel restaurant was immediately followed by our Aurora chaser companion for the night.  He took one look at my camera gear and asked where my tripod was.  I answered sheepishly, "Um... Boston.”  He said, “Well it’s lucky for you I have a spare!”  The only thing that kept me from planting a big wet one on his cheek was the thought of the possible repercussions to US /Icelandic relations.  We piled into the van and headed out. The Icelandic landscape was a bit primeval, with steam pouring out of the ground and the hint of sulphur.  We arrived at out spot for the night and piled out. We were met by another van, and a large group gathered looking at…nothing.  After about fifteen minutes our guide pointed over a mountain on the horizon, “There!  Do you see it?”  I mounted my camera on the tripod that the guide had loaned me.  It made a brave effort, but it had been designed to hold small light point and shoot cameras vs the dSLR and 24-105 lens I had brought.  It slumped under the weight.  Every fifth shot would be a streak of light and color as the legs fell or the head tilted.

The little tripod that could... some of the time.

Still I got more shots than I would have had the generous guide not had the tripod with him!  One of the groups decided they had had enough of the temps in the teens and left the rest of us crazies to stick it out a few more minutes. 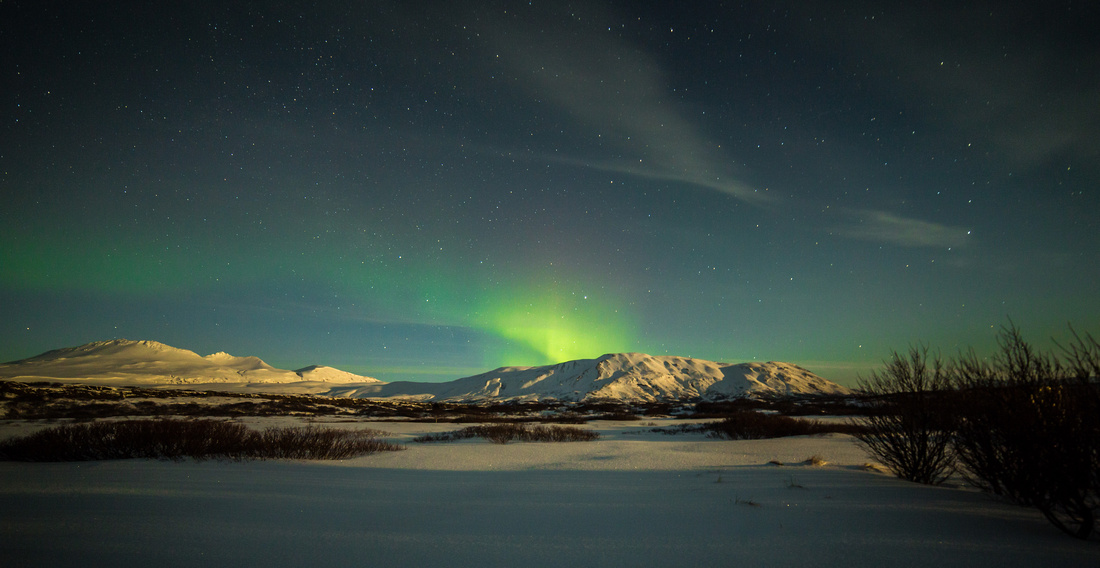 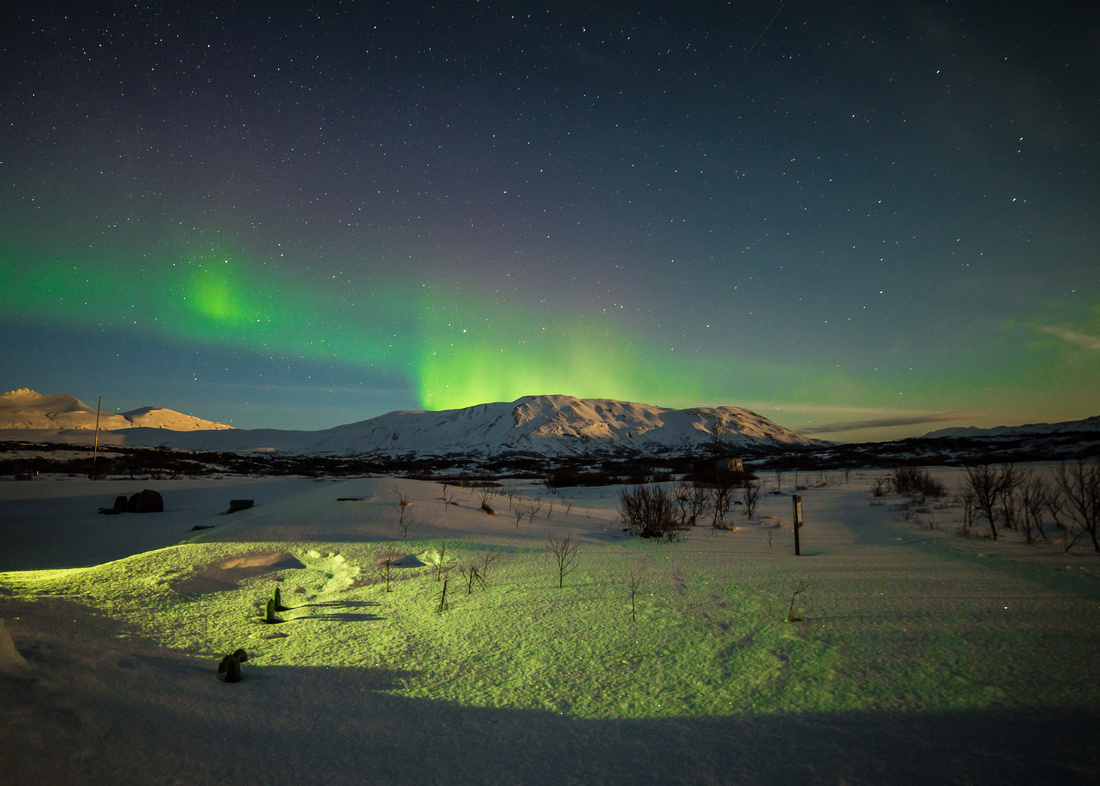 Finally we piled in and started back toward Reykjavik.   It was so cold that there was frost an eighth of an inch thick forming on the inside of the glass.  A gentleman in front of me scraped away the ice on the window and immediately started yelling, “Look! Look!”  The sky was exploding, with green plasma writhing in serpentine patterns across the sky.  We rapidly warmed numb hands and then ran outside as the driver pulled to a stop.  As the neon colored light tinted the snow in yellow greens, all I could think of was, 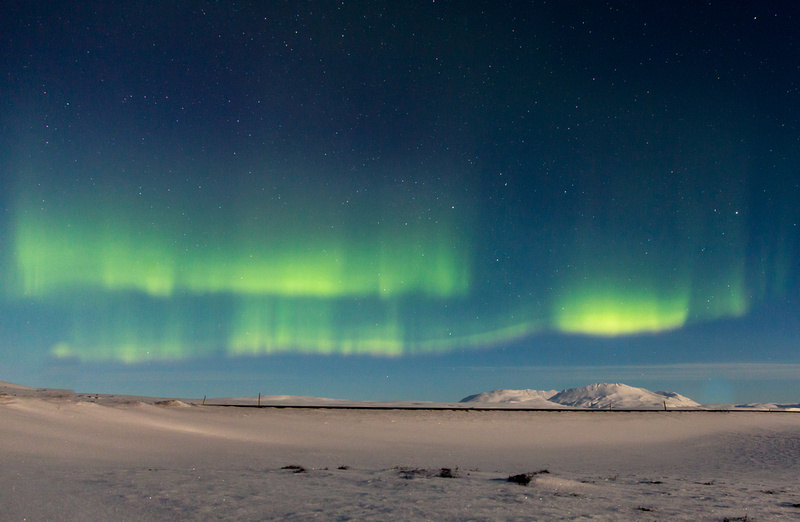 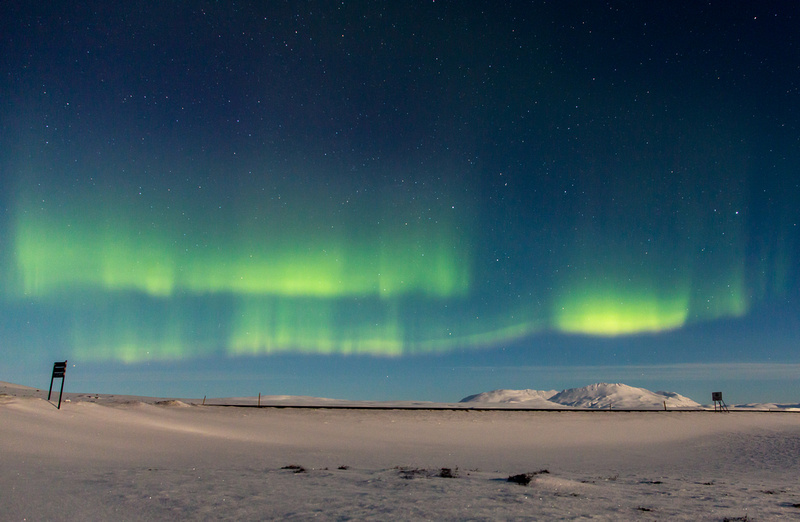 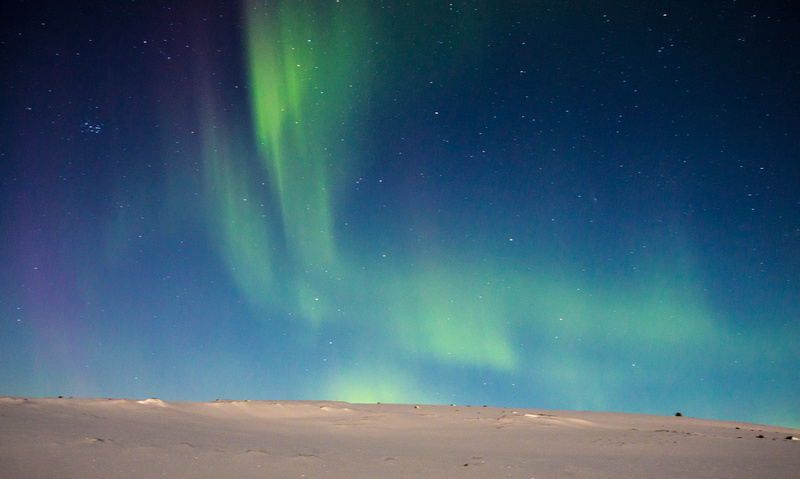